I'm excited and honored to have been named to USEF's US Dressage Elite squad for 2019. Sanceo and I are looking forward to the coming...

For the second year running, Sabine and Sanceo were awarded the Carol Lavell Advanced Dressage Prize for 2018. They received it first in... 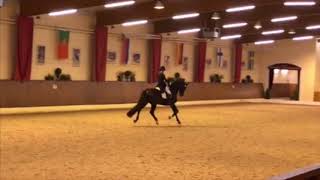 Back to the Sandbox

Had a blast taking my boy back to the sand box. He is such a joy and he sure knows how to put a smile on my face. It was just Sanceo &...

Sabine will be using part of her Carol Lavell Advanced Training Grant to travel with Sanceo, owned by Alice Womble-Heitmann and Dr Mike...

Back to the Sandbox

Sabine in the news

press to zoom
The P.R.E. Horse

Sabine has trained several P.R.E. horses to elite levels, and was featured on the cover of the International P.R.E. magazine, "The PRE Horse"

Sabine has been a frequent covered rider for Dressage Extensions

press to zoom
USPRE for Performance

Sabine's training successes with PRE horses were also featured on the cover of the US P.R.E. magazine

Another cover featuring Sabine and Sanceo

Sabine was featured on the cover of Horse Show magazine back in 1997, demonstrating her iconic Friesian high rear

click the image to read the articles, or to be directed to the online article

JJ sits down with Elite Dressage Rider, Sabine Schut-Kery to learn about her 12-year partnership with Hanoverian stallion, Sanceo, her start as a young rider in Germany, and her thoughts on competing.

The Equestrian Connection Podcast interviews Sabine Schut-Kery, the newly crowned Olympic Team Silver Medallist with the US Team in Tokyo.

Chronicle of the Horse

Sabine Schut-Kery's Olympic Journey Started With A Partnership, A Pipeline And The Perfect Half-Halt

Sabine Schut-Kery: "I Love the Mind of the PRE, the Fire and Desire for Life!"

A Red, White and Blue 5* Day: Steffen Peters and Sabine Schut-Kery Kick Off AGDF 7 Competition with Victories in the CDI5* Grand Prix

USEF announced the 2019 US Dressage Elite Squad, with Sabine and Sanceo chosen as one of the 7 Elite combinations named

Read more in this Dressage News article about Sabine and Sanceo being named to the USA Elite Program in April of 2018.

Thoughts on the P.R.E horse in dressage

How teaching a horse "tricks" can train his mind & build communication

Thoughts on Friesians, Lippazans, and Andalusians